It’s been quite a while since the last Johannesburg Motor Show, and it’s been well worth the wait! You’d expect the show to improve year on year but the jump in the quality of the show from the last is unbelievable. It truly felt like the “International” motor show the JIMS name holds. If you didn’t get to go, here are some of my highlights from the show

The highlight for me from the guys in Ingolstadt was the Audi E-Tron Concept. The RS3 and A8 Long wheel base were also there but needless to say the long wheel base incarnation of the A8 didn’t exactly make the base of my penis fizz.

Take me to your leader

What did, was the Audi E-tron, which made its debut at the Frankfurt Motor Show in 2009, and attempts to take a stab at a high performance battery powered car. It’s claimed the e-tron’s electric motors produce 10 times the lb/ft torque of an Audi R8 4.2. Say what? Audi claims the car will reach 100km/h in 5.9 seconds and up to a 260km/h top speed. Doubtful that’ll all happen at once, and it’s still a concept, but my God it’s beautiful! This truly shows the future of electric vehicles, no longer do they have to shout “I’m driving a hybrid!” but rather, “Hey R8 driver! My car is better looking than yours and drops more panties than Daniel Carter. I do hope they change very little when this car makes it into production. Someone who has done very well when it comes to changing very little on a concept car is the guys from Range Rover.

Another real show stopper, not because it’s something nobody knows about (if you don’t you’ve been living under a rock) but rather because for many people, including myself, it’s the first time seen in the metal. The Range Rover Evoque (pronounced E-Vogue…like an electric Vogue magazine) The Evogue goes on sale in a few months and 700 South African early adopters have said “I Do” to the Evoque without

seeing it in the flesh or let alone even taking it for a test drive. I can’t remember the last time that’s happened with a car in SA, especially one for Land Rover.  The Evoque looks amazing in the flesh, it’s a beauty, and a lot smaller than I initially thought it would be. Range Rover featured 5 models in different specifications to give a sense of how these cars can be specced out and they look haaawwwt! Underpinned by a Freelander drivetrain the Evoque is still very capable off-road (tyre selection dependant) but no doubt it’ll spend its time in the hands of the hottest car park mommies and BEE boys.

Something that will however no doubt make its way onto the dirt roads of South Africa is the new Ranger. You might be frowning wondering why I’ve chosen to feature the Ranger, but this car is Ford’s first global “bakkie”. Ford is investing huge money into their model lines to develop vehicles for their “global” market, instead of having incarnations of model lines in every country (saving costs and so on). The Ranger however was quite a hit at the show, with many two-tone-bellies plowing over from Toyota and Nissan to have a look at this new “bakkie”. The most important changes are to the exterior, which now actually looks pretty damn cool, as well as interior, which, adds many

creature comforts and brings it in line with its competitors. Ford has seen the light and states, “ Just because it’s a truck doesn’t mean it has to drive like one”. Truth. The Ranger goes on sale in SA before the end of the year (Nov) in 2.2TDCi, 2.5 Petrol and 3.2Diesel, aimed squarely at the competitor diesel engines. You can guarantee that Toyota, VW and Isuzu are shaking in their space boots.

Not a whale, it's a Merc

Speaking of space boots, I must commend Mercedes Benz on what I thought was the best stand of the show. It was by far the most interactive and featured their entire model range, which I must say, is now looking very well aligned, and a lot better than back in 2005. This said the A-Class Concept was the star of the Mercedes Stand (Except of course for the Viano people mover, which Trevor van der Ven nearly wet his pants over) The A-Class concept is a mirror ball view into the design style Merc will bring us in years to come, and I’m not complaining. 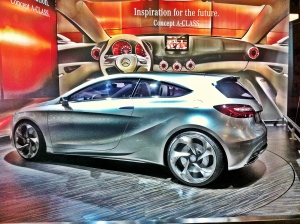 Most importantly will be this A-Class model (hopefully very close to the concept in styling) which needed a lot of work to do more to compete against the likes of the 1series and A3. The car is so vastly different from the current Elk-failure that I can’t even draw similarities. It’s quite brash and the grille very “in your face” but the lowered roof line and heavy creasing in the metal goes to show this A-Class is going to be a totally new car for a totally new market. Hashtag Excited. 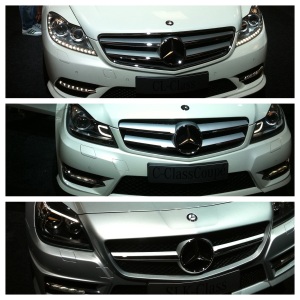 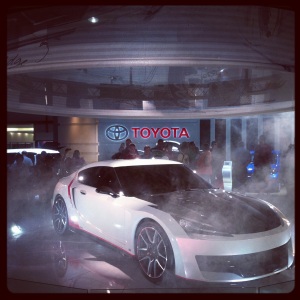 Another concept we’ve seen floating around the various motor shows for quite some time is something from, wait for it, Toyota! Yes sir, the Toyota FT-86! The FT-86 is a joint model (engine) development with Subaru but Toyota has stolen most of the lime-light with the FT-86 releasing first. This is the first car in quite a while that’s going to deliver on the demand for performance models for the Toyota market in SA, and of course the zooped up tuning shops worldwide. Toyota confirmed that the FT-86 will be coming to South Africa around June next year and we can expect a naturally aspirated four cylinder powering the rear-wheels, which is something we haven’t seen in SA for about a decade. What’s interesting is that Toyota knows their fans will be boosting and pimping the shit out of this vehicle so modifications and maximum strength parts are being used to ensure that the vehicles handles all the mods that will be thrown at it. Truly excited about the FT-86 from Toyota.

Overall a fantastic show! I’ve only just mentioned very few of the numerous new models and concepts released at JIMS but if you didn’t get to see the show you’ll no doubt see the full review in your local car magazines, newspapers and TV shows. 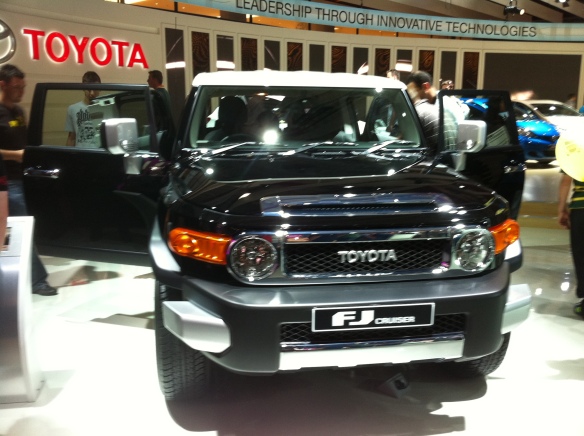